‘Delivering a set filled with flamboyance, cheek and endless grooves, Superbird proved they are about to soar higher than ever before.’

Gig Review
The fact that I am yet again featuring Superbird may not come as a surprise considering they are very much a regular feature. However, what may surprise you – and certainly surprised me when I realised it – was that it has in fact been more than 2 years since I first saw them live. Shocking I know! Of course, this has been more down to circumstance than choice so clearing the diary, and getting their set at Notting Hill Arts Club (Saturday 8th February) in the calendar good and early, no circumstances were going to stop me going. It is true that when you’ve followed a band for such a long time, you wonder if the recorded sound you’ve come to love will transfer to the live setting. It is also true that, given the showmanship of frontman Joe back in 2017, there was a chance – albeit a very small one – that this persona may have changed. But as quickly became apparent, there was nothing whatsoever to worry about.

Following sets from Luna Blue and Echo November, the trio headed to stage of this intimate, below ground and exclusive seeming venue dressed in trademark patterns and out-there attire. From drummer Alex’s spangly shirt, to bassist Freddy’s Hawaiian combo to Joe’s dizzying patterned threads it was certainly a look. A look that everyone has come to expect. Just like their releases, there was no shortage of flamboyance, cheekiness or confidence in the personas these guys have. They are on a constant mission to put powerhouse funk into everyone’s lives, and heading into their opening track they were to put it into everyone’s Saturday night.

Turning what was indeed a small venue into something that felt much, much bigger, the atmosphere turned from anticipation into energy both on and off the stage. Getting the crowd going from the very first chord, the infectious sound of ‘Super Superior’ soared into everyone, instantly injecting them with grooves that you couldn’t resist. It was indeed a hell of a start to a set and with true fans in the crowd, it was incredible to see just how much everyone was loving this much underrated – and much underfollowed – trio. Musically, it was already exactly what everyone wanted, and while there were also early signs of the showmanship, that was soon to explode as much as the sound itself.

Shifting gear to even higher energy, following the opener we headed into the full-throttle ‘Kiss Chasing Stars.’ Beginning hectically with soaring lines and pounding drums, it was instantly a contrast to what had just been and as a result, the atmosphere grew immeasurably. Causing everyone to lose their inhibitions, the sound pushed to max making it feel like an unstoppable, funk-soundtracked workout. As for the band themselves, given the uncontrolled moves and the number of facial expressions, I’m not sure how they had anything left at the end of what was only the second track. No wonder that a brief moment of breath-catching musicality was now to arrive. 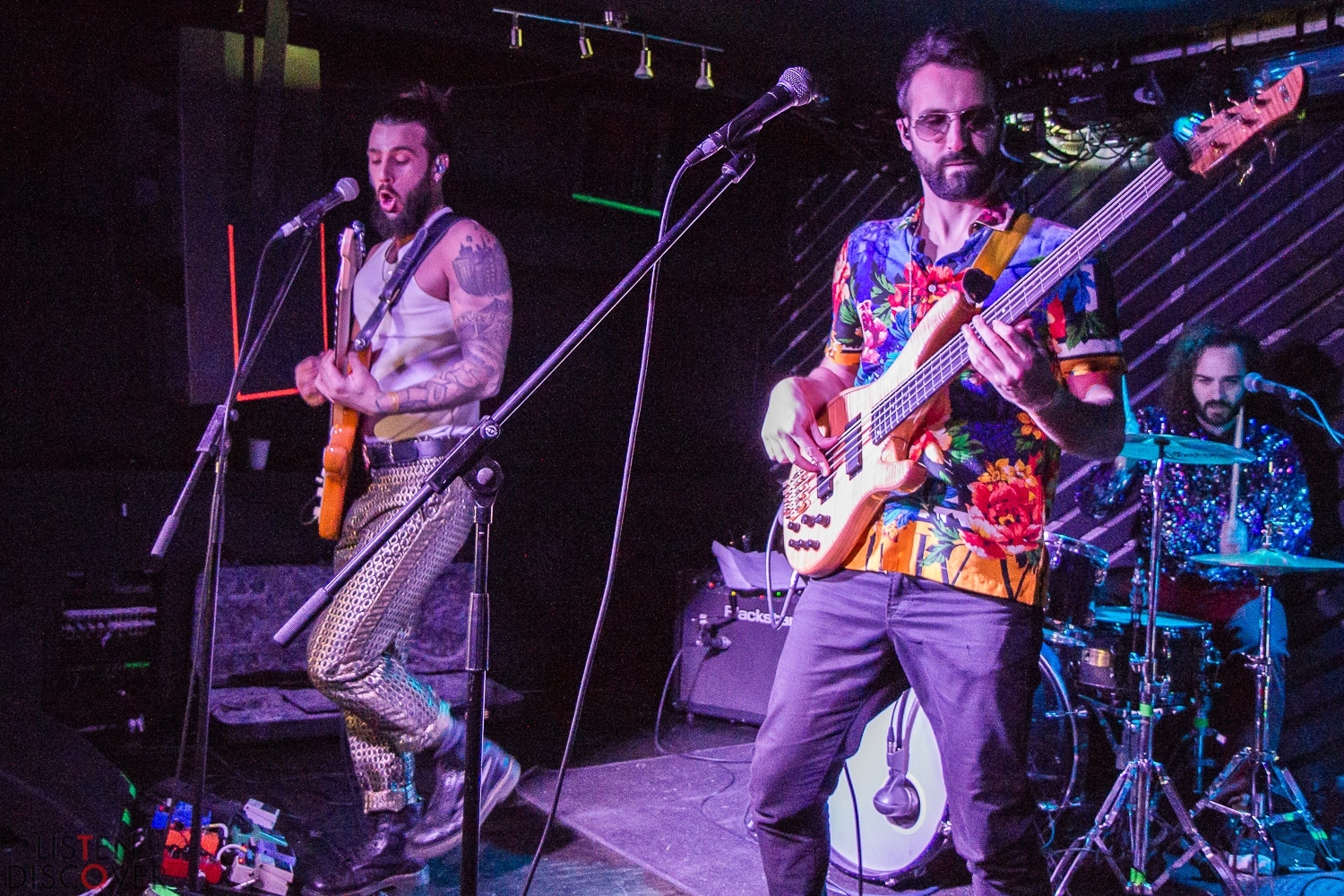 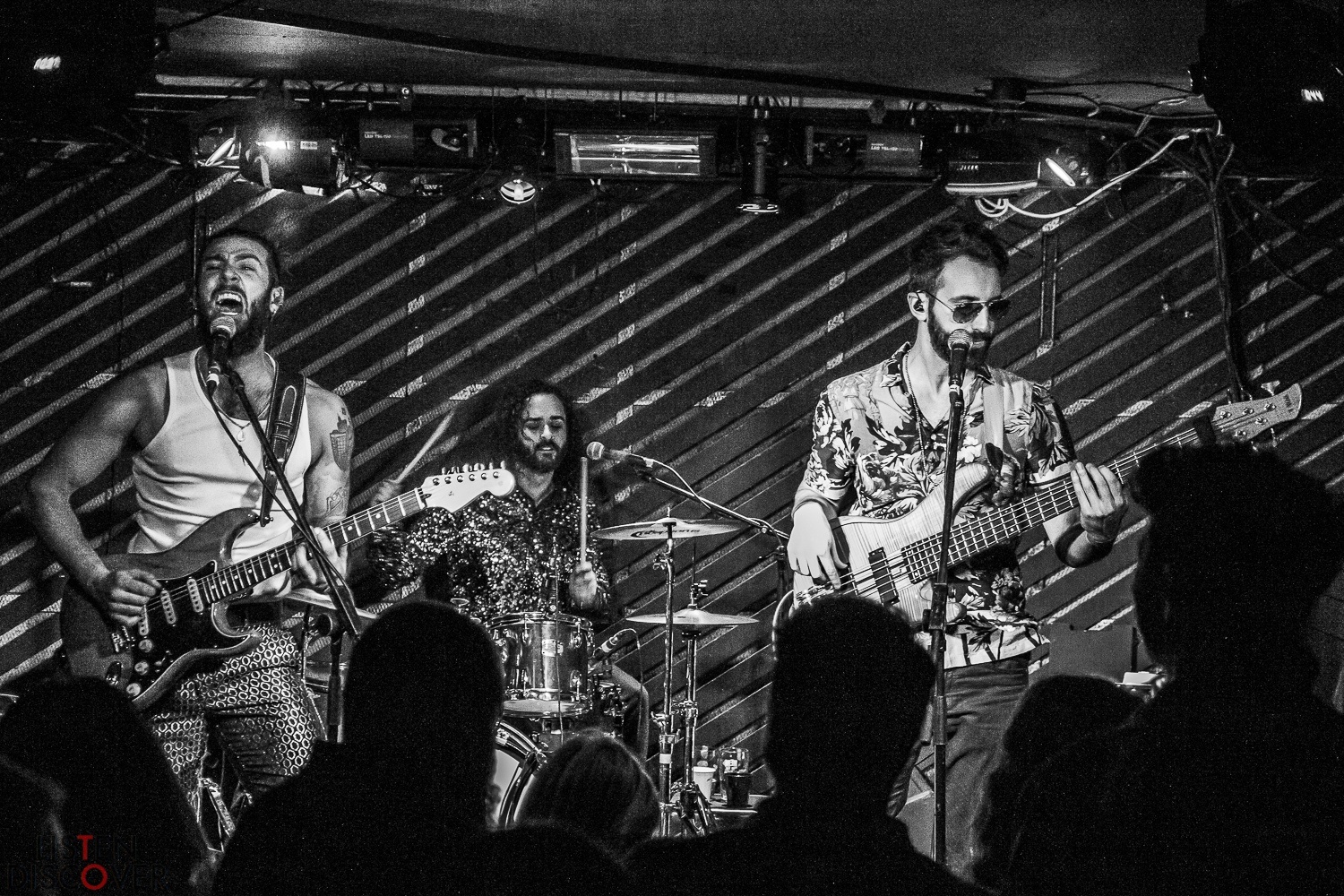 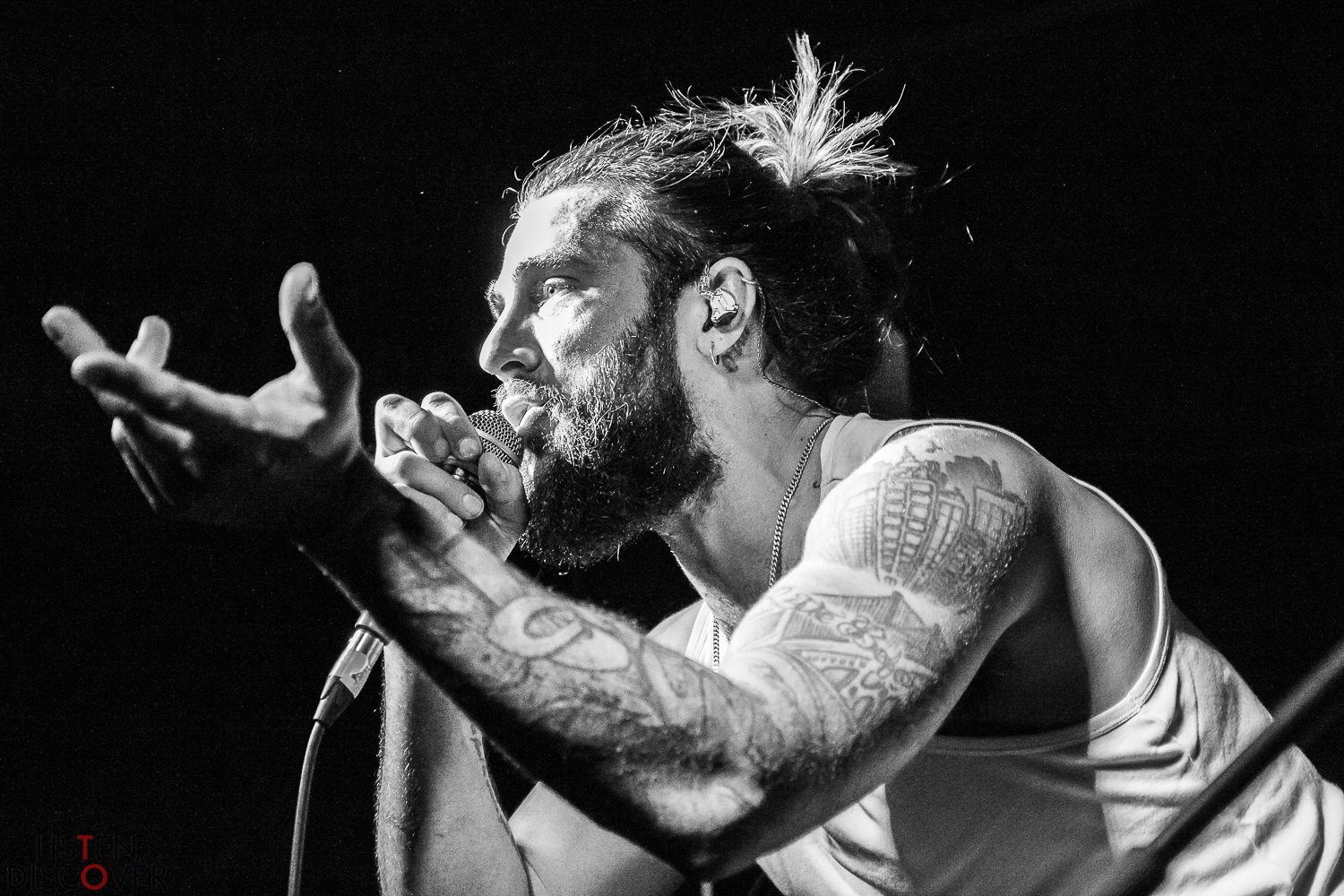 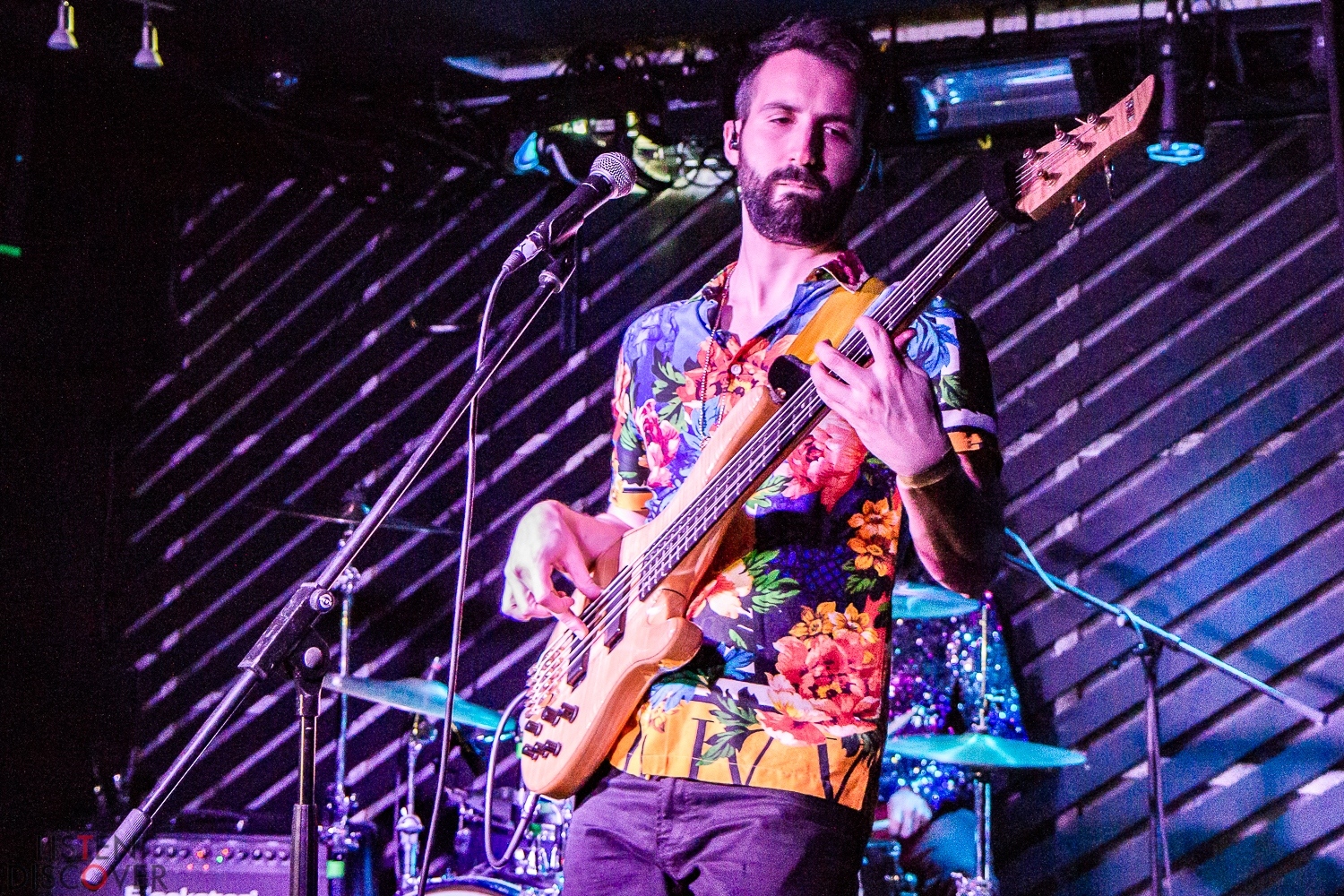 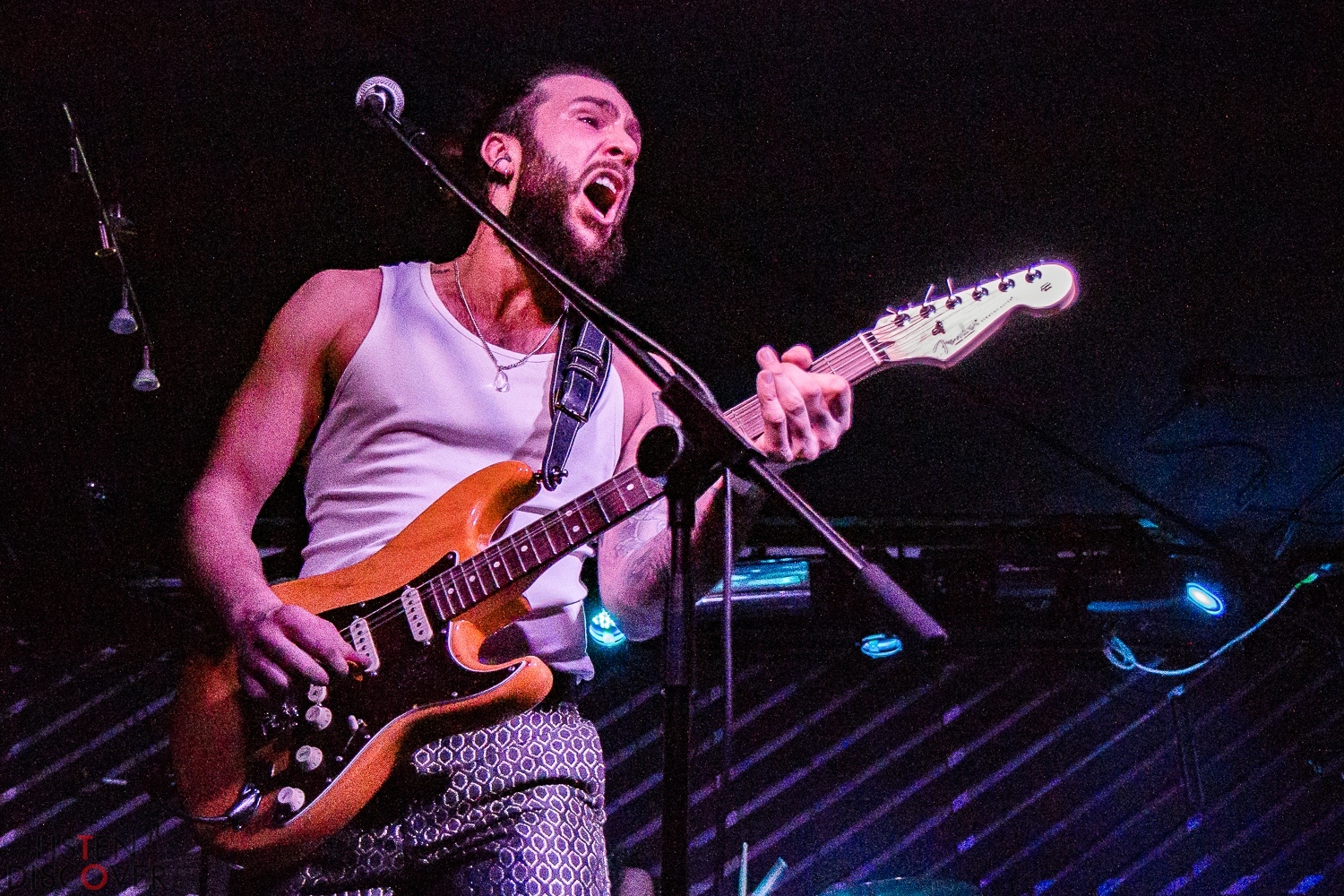 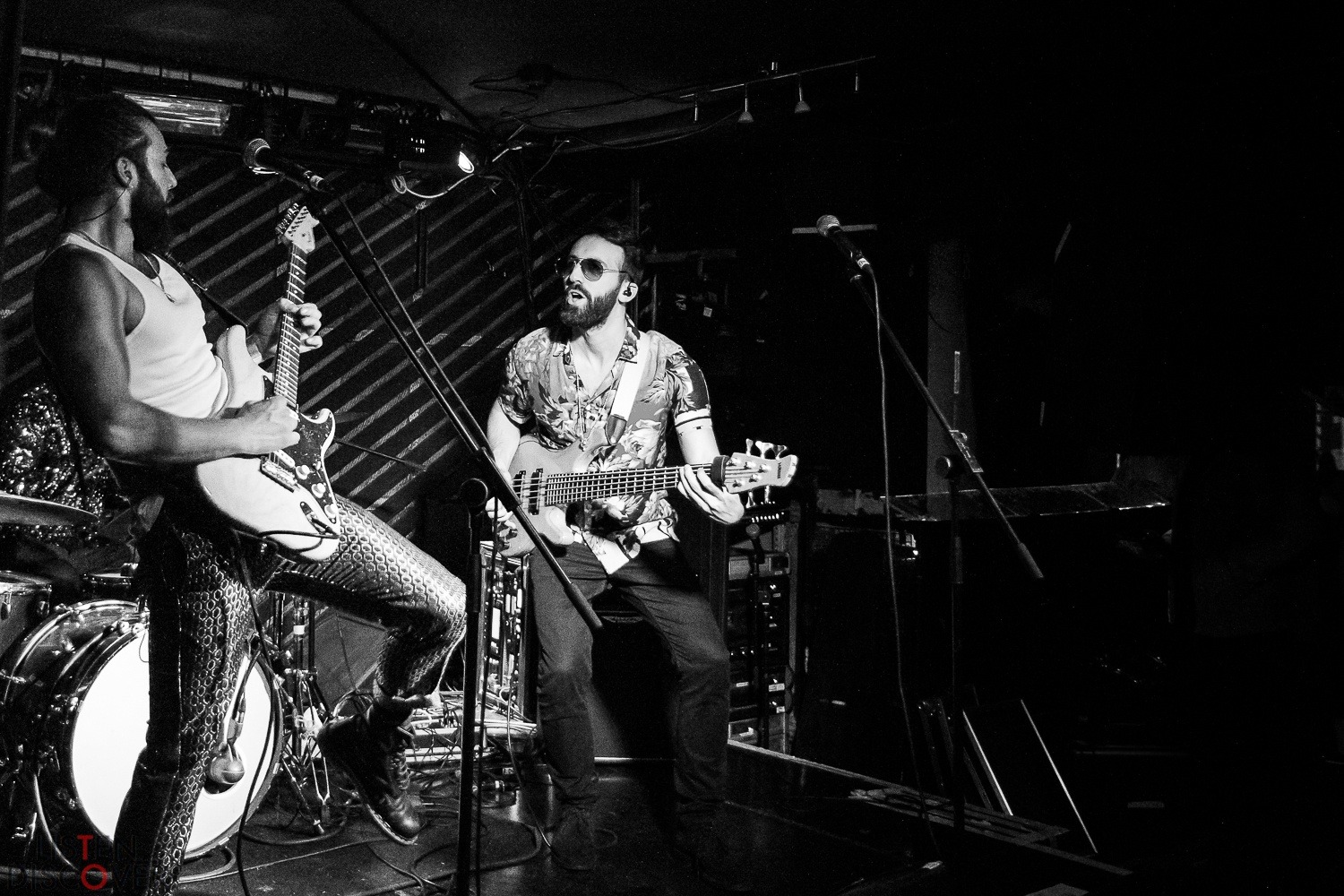 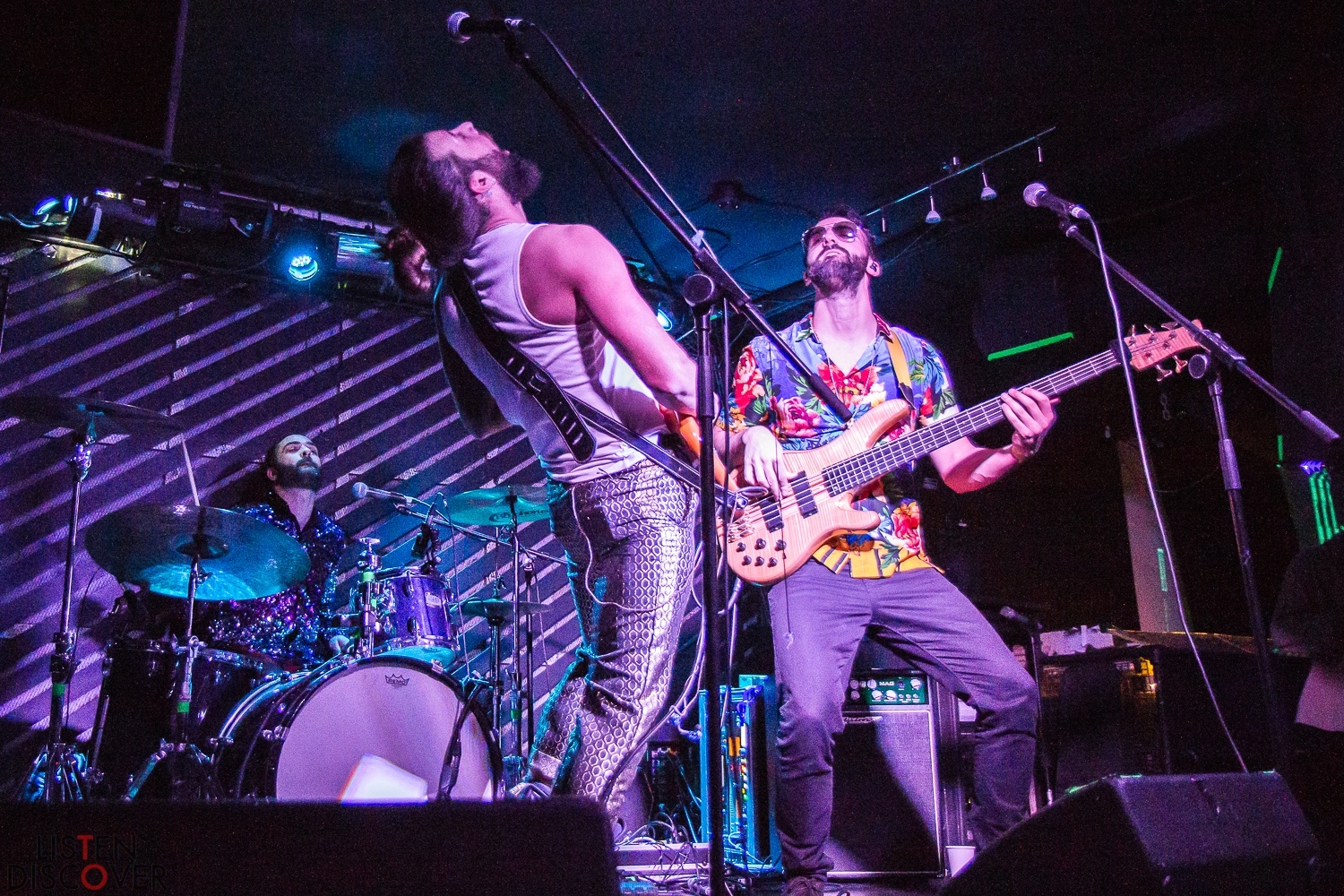 Having perfectly demonstrated the innate energy that lies at the centre of their tracks, we were now to experience the unique approach that Joe has to his stagecraft when not performing. Proving this perfectly, on moving front and centre he invited us into what I will affectionately term as his – or should that be Superbird’s – ‘unique musical circus.’ Seamlessly switching between personas, Joe spoke like he was trying to seduce us one minute and the next, he was delivering shameless cheek. In short, he was the inimitable musical ringmaster. But like the sound, this was to soon be built on even more.

Ensuring that there was never any shortage of showmanship, both spoken and music centred moments continually enhanced the experience as we moved through the set. Half-whispering the phrase ‘I have a secret and a message for you’ before heading off into ‘I Think You Got Me’ the tone was wonderfully set for what was to come in the track itself. Equally, telling us about the fact he ‘had a sweet tooth’ – and asking if we did too – made for the perfect precursor to the addictive ‘Cola Bottle Fizz’. So addictive in fact that the drum centred breakdown resulted in the crowd chanting ‘Shake it, shake it up’ until the atmosphere was about to completely pop.

Delivering such a high-level funk induced sugar rush as they just had, after the succession of released tracks, it was time to hear something forthcoming in the form of ‘Operate.’ Slower than most others – though not by much – this sexy, dirty funk style track was the ideal way to showcase what’s coming later this year. However, while this was brand new, for those who have been fans right from the beginning, the track which came after would have felt very familiar. Originally heard under the guise of Joe Fin back in 2017, the inclusion of ‘Marion’ in the set proved both how ahead of the game it was then and how right it is within the new sound. Like every other release, it’s phenomenal and while you can only hear it live currently, next month you will get to experience it in all its glory!

Having just come full circle with the previous track, moving toward the end of the set, ‘Big Trouble’ brought back the more sophisticated side of Superbird. More relaxed in groove, the effortlessly cheeky lyrics brought endless grins while the overall sensation was more about peacock-strutting than making brain-busting shapes. Don’t think this stopped them though. Even in this they made sure there was most definitely time for showcase moves that proved just how much Joe, Freddy and Alex had been truly loving every the moment. If you needed further proof though, in closing the set with ‘Year on String Along’ the plethora of poses, power house funk riffs, explosive solos, and spellbinding vocals gave us exactly that.

All photos copyright of Listen to Discover. See more at: Gig Photography: February 2020