‘Feeling more like we were watching a film than experiencing a concert, it was the classiest of musical performances.’

Gig Review
Having had the gorgeous sounds of Camilla George fill Cadogan Hall during the first half of this EFG Elements concert for London Jazz Festival 2019 (19th Nov.), the second half was to feature the inimitable musicality of American pianist Christian Sands. Noted for his incredible releases – right from his debut album ‘Foot Prints’ when aged 12 to 2018’s ‘Facing Dragons’ – his touch of the keys displays high class musicianship whether it be arrangements of jazz standards or original compositions. The night however was to very much the former, and taking the first steps on the journey that was to be ‘A Tribute to Erroll Garner’ you felt sure it would be one hell of a treat.

Casually making their way to the stage, the High Wire Trio – headed up by Christian and backed by double bassist Luques Curtis and drummer Terreon Gully – oozed sophistication and welcomed by a rapturous reception, the set began. Instantly we were hooked and while Camilla’s set had taken us to the jazz club, the sense of musical intimacy here meant Christian had us in the palm of his hand within seconds. Opening with the wonderfully hectic sound of ‘Chase Me’ you couldn’t fail to notice the beaming sense of joy that the trio gave off. Equally with soft whoops from the audience at the end of showcase solos, it was an early indication of just why this 5-time grammy nominee also become creative ambassador to The Erroll Garner Jazz Project in 2018.

Moving through the initial parts of the set, there was no chance to be distracted by anything other than the wealth of musicality itself. Shifting to the sounds of ‘High Wire’ – from which the trio gets the name – each musician delivered an abundance of stylish fragments, enhanced melodies and improvisations beyond compare. Equally, when performers so evidently enjoy what they are doing, an audience can’t help but do likewise. Hanging onto every note, it was as classy as could be and with Christian himself speaking about the trio being in remembrance of Erroll, as well as the background to the concert, we hung on to every word too.

Setting up the mood of the night further, on performing ‘Dreamstreet’ a silk-like touch as soothing as his vocal tone emerged. Completely effortless, this change of pace was as captivating as could be with each note given space to breathe and time to be enjoyed. It really was an in-the-moment sound. One which could only be achieved down to the off-the-scale level of musical understanding the trio possessed. This though was to be pushed to brand new levels with the cheeky spoken introduction of ‘Erroll’s Theme’ which, in the words of Christian, ‘Had a main theme of about 20 seconds but because it’s jazz it will be a bit longer.’ As it turned out, this cheekiness was also held within that very track and with the mix of archive spoken recordings, beautifully sublime changes of style and insane dynamic control, it took us more in the direction of watching a film rather than experiencing a live performance.

Following further spoken moments from Christian, we headed in a more familiar musical direction with the inclusion of ‘My Funny Valentine.’ Not announced ahead of the performance, it demonstrated how seamlessly a main theme can be worked into an elaborate improvisation. Somewhat amusingly, the fragment melodies gave just enough for it to be relatable. However, even more amusingly, this, as can be very much be the case with jazz standards, was a double-variation with it being Christian’s version of Erroll’s version. Either way though, it was as musically eloquent as could be. 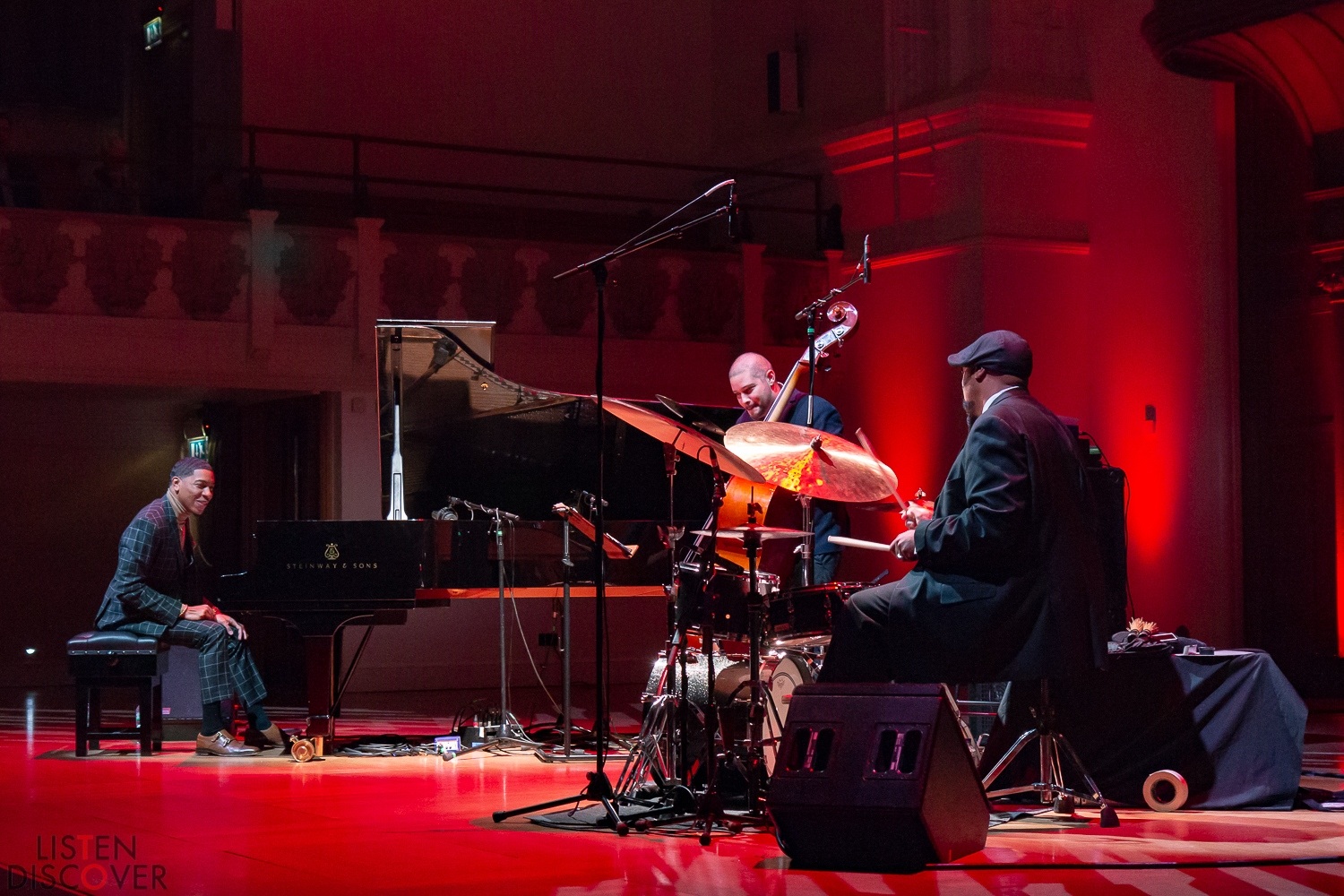 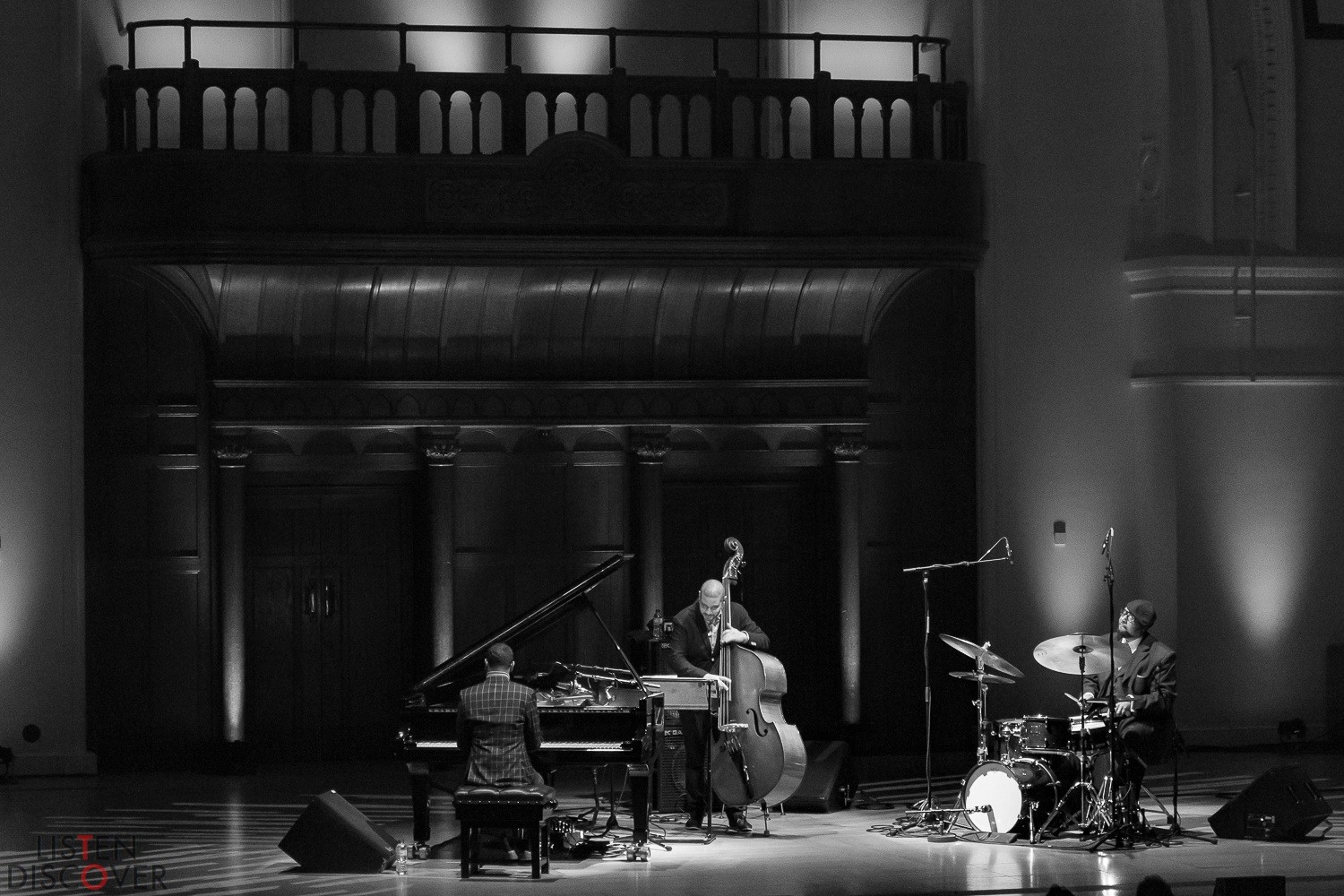 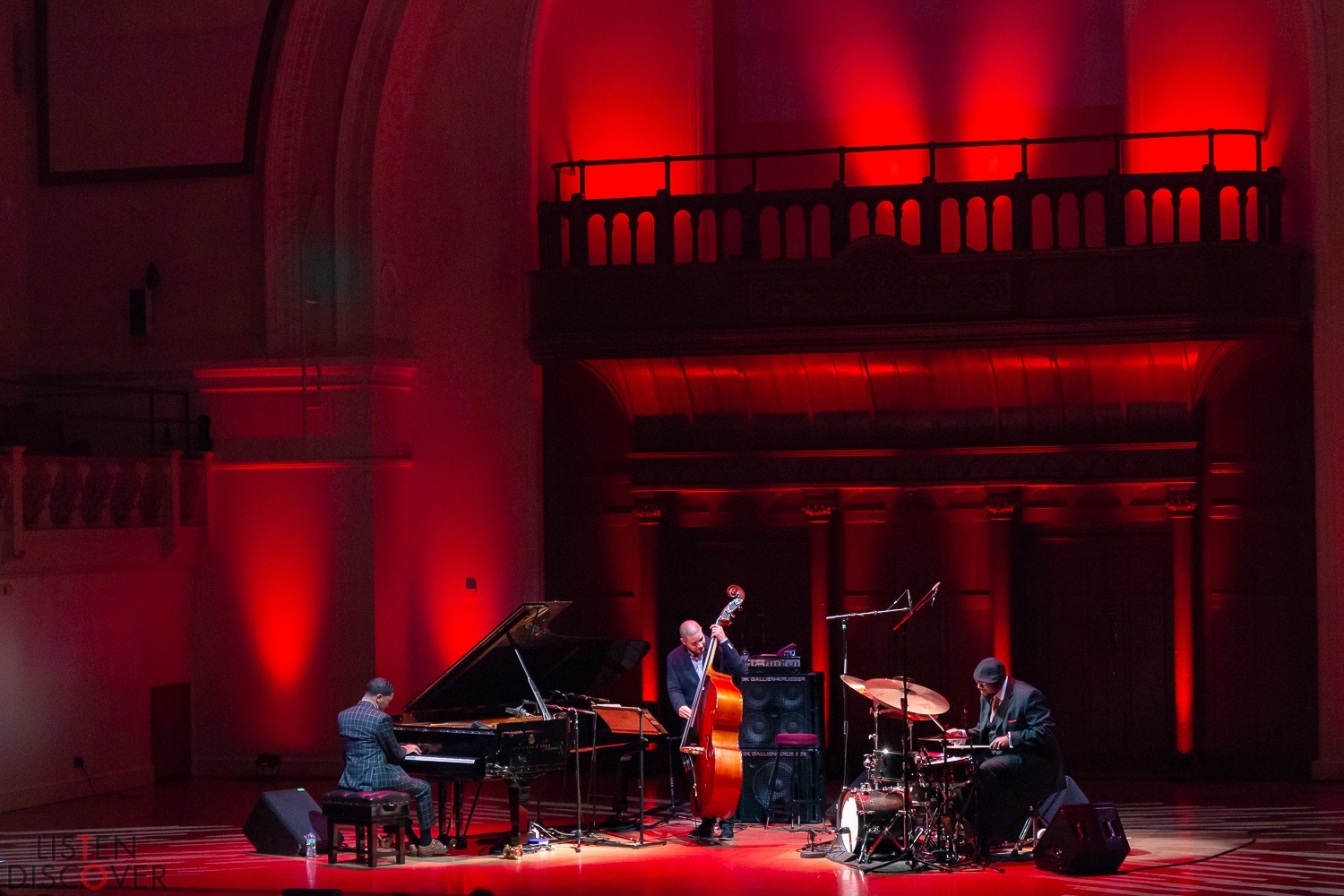 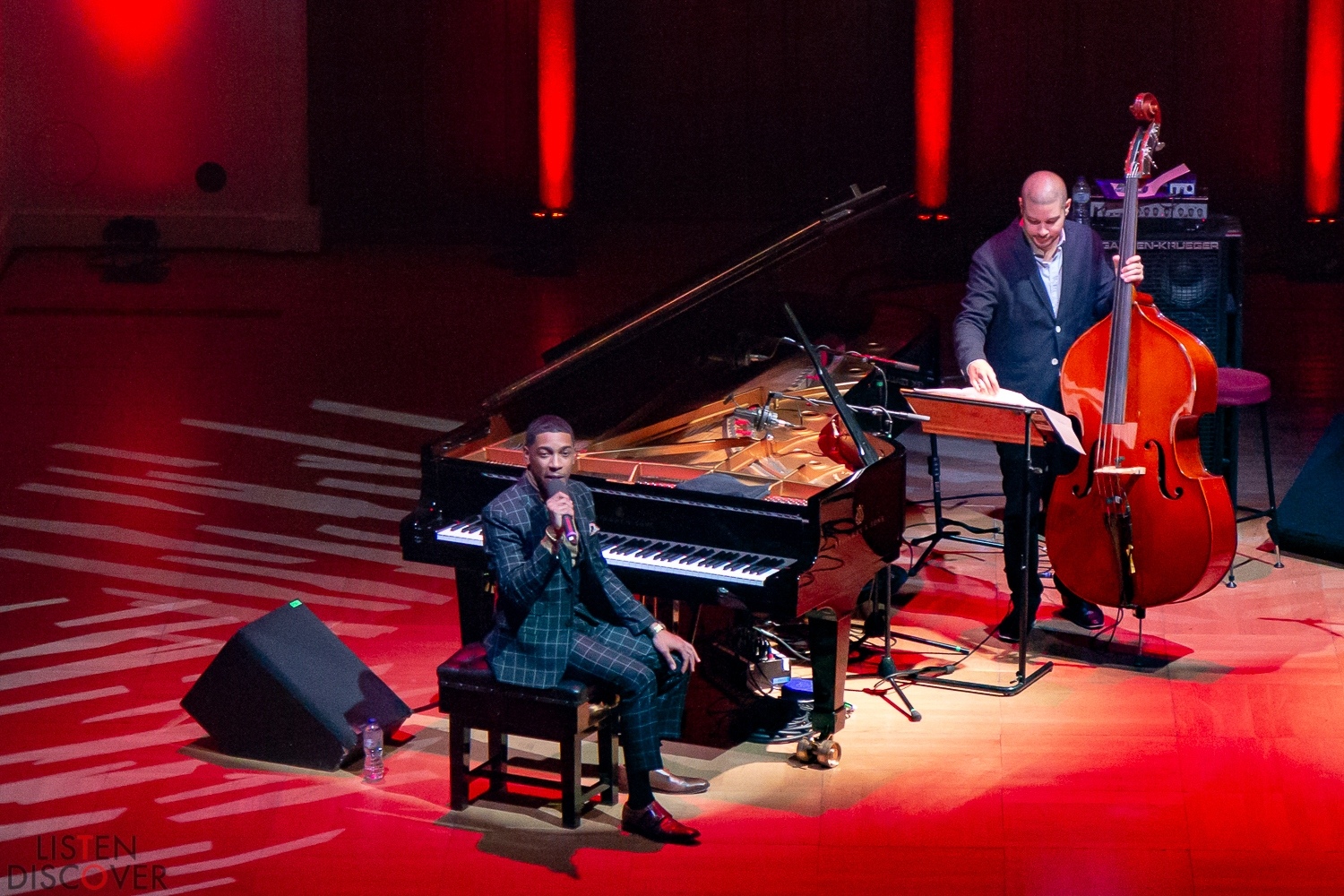 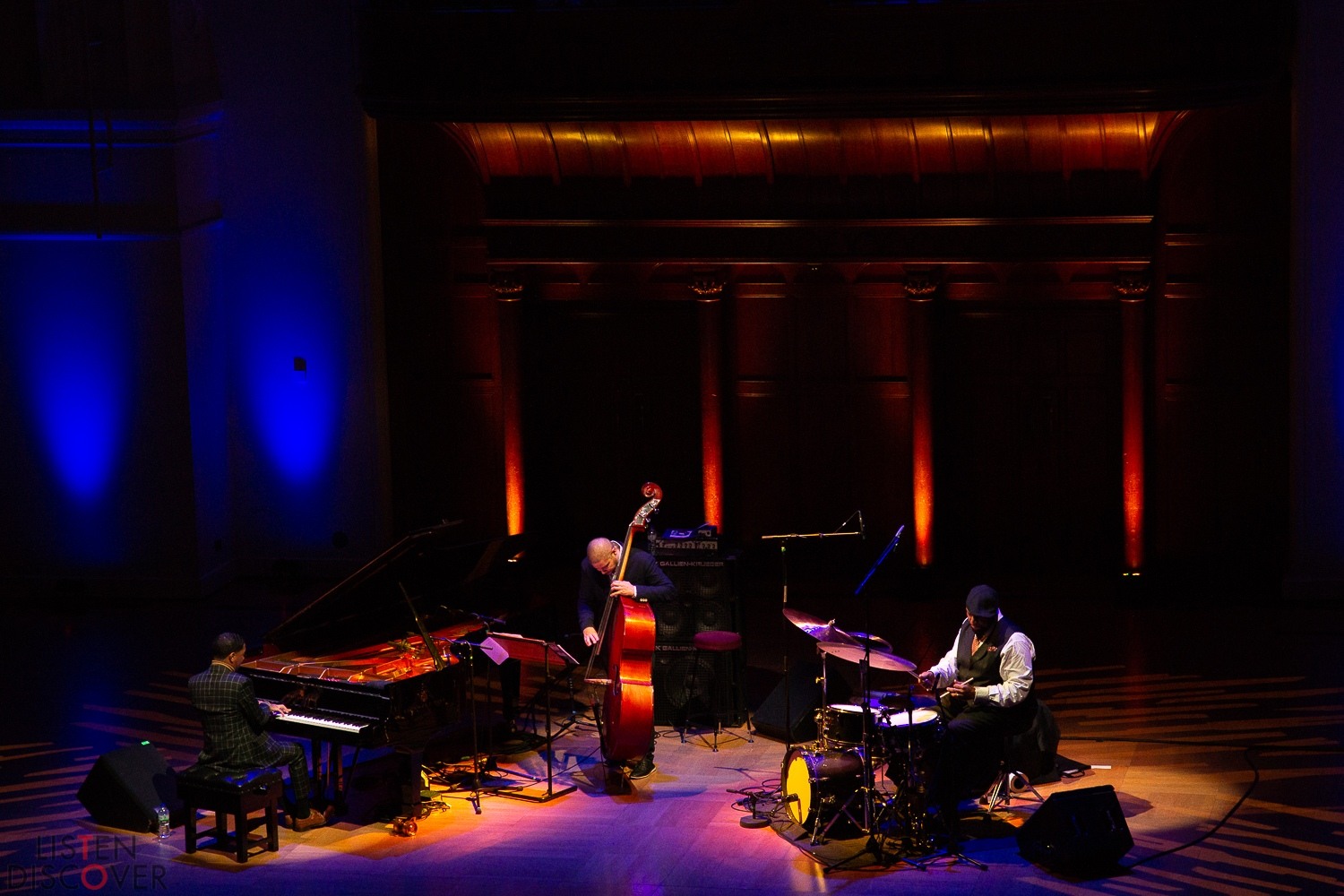 Returning once more, and not for the last time to archive recordings, with the touching version of ‘My Funny Valentine’ completed it was time for drums to be centre stage. Initially improvising lightly over recordings of Art Blakey, the drumming of Terreon Gully became increasingly hectic and faster than you could ever imagine. Sticks blurring beyond belief, it was impossible to not be in awe. Equally with both Christian and Luques watching and feeling every beat, it was clear they felt just the same. However serving dual purpose, this formed a much extended introduction to the appropriately titled ‘Wild Music’ where classy sophistication transformed into latin infused musicality.

Seeming as though the trio had truly given us everything, ahead of the final track Christian spoke with us once more and praised us for being such an amazing audience. If we could have, I’m sure that everyone at that point would have wanted to say the same to him. In fact, probably the only thing that stopped it happening was knowing that there was something else on the way. As ever though, this was to be the classiest of performances to finish with and allowing a further archive recording – this time of Erroll’s thoughts on pop music – to introduce the track, the trio segued perfectly into ‘Yesterday.’

Combining touchingly played variations that ranged from sublime to sudden bursts, it highlighted everything we had loved about the night. It was little wonder then that with a lengthy and enthusiastic standing ovation, the trio returned to the stage for an encore in the form of ‘Misty.’ Delicately utilising the piano strings ahead of the main themes appearance, and dripping in the classy musicality we had experienced the whole night, it provided the perfect ending to the film you never wanted to end.